It took me longer to edit the montage of video (link at end) and mainly pictures as the Wi-Fi at the house we rented was only ok. Not like what I have at home due to work requirements. So, I only finished it this morning.

We came back early to get my vaccination, and managed to get the other half sorted at some time instead of needing to pop back again early this morning. I’m currently having a few of the side effects; ache in my upper arm, a few chills, but otherwise fine. The other half has had no side effects. Everyone is different.

But I digress. We had a lovely time this past week. Despite Sunday being a washout with near constant rain or drizzle and then on Wednesday the coast was plagued by fog all day, we managed to get some walks in. Typically, Friday when we had to come home was beautiful and sunny.

This is the view from where we stayed.

And this was the view on Wednesday. We headed across the Presili hills and we’re greeted by sunshine however there is not much open yet.

Our first walk day was Monday so we bundled the old girl into the backpack. I purchased one with structure and a solid base so she could sit comfortably. The last one, was a rucksack type and she just slumped like a sack of potatoes. This time she was more comfortable.

We walked to the Newport Beach by joining the National Coast Path at Parrog. I already posted some pictures previously, but here’s a few more.

Day 2 of walking was a ‘there and back’ without the dog due to it being cliff walking; about 8 miles. She would not have enjoyed it. I hoped to get to the Witches Cauldron on this day but the other half was tiring and we needed to ensure we got back for the old girl.

The coastal path could give those with vertigo some nervousness. At times you are right near the edge. It’s not a walk for daydreaming. You do need to watch where you are going.

The cliffs and geology here is fascinating. It’s a real mix of rock from hundreds of million years ago, formed at different times. Continental drift has been at play. I didn’t realise until reading up on the geology that we were walking the International Appalachian Trail (an extension of the Appalachian Trail). Seems that when the continent Pangea was formed, then split, some of the rock went with what would become Wales, Scotland and Northern Ireland, and the rest went with what would be the North American continent.

Another interesting feature is in this picture above. You can see the different rock vertically in this this cliff face, adjacent to rock more horizontal. Some areas that will have been underwater at some point had igneous intrusion of magma which cooled slowly forming large crystalline structures. I can only think this is one such intrusion. In other pictures you’ll see in the video show the massive forces that fold the rock as continents collided.

The gorse plants clothe the cliffs here as in many coastal areas and their bright yellow flowers are at their best now. On our return trip, the sun had warmed the flowers and at sections where it was prolific, the air was heavy with the delicate pineapple scent from the flowers.

Day 3 as mentioned was a non-starter. Day 4 we got back on the cliffs, but under overcast skies, so it was much cooler. This time a circular walk, about 8 miles, the same as the day before.

We had a small detour back to the Witches Cauldron, a collapsed sea cave. Interesting to see, and if I were a kayaker, it would be great to paddle into it and explore the rest of the cliffs from sea level.

Onwards we went towards Poppit Sands via Ceibwr Bay, although we would be turning inland before then. We had some quite steep sections here, which tested us and showed how unfit we are. Have a go at the Welsh on the sign below. 😁

The last sections went through farmyards and two gardens. I always feel odd doing that, but it’s public footpaths. We used to have one alongside a wall at the back of one house we lived in. If not used much, it’s fine.

We were both exhausted after the walk. Slept well that night.

It would be good to visit another section of the route and walk more. If we had the time and probably retired, I would quite happily walk the full route of nearly 300km over the course of three weeks or so. One day.

Here’s a link to the video where you can see more photos and a couple of short clips. Enjoy! 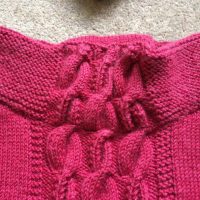 A Year of Kayaking

My year adventuring in a kayak as often as possible